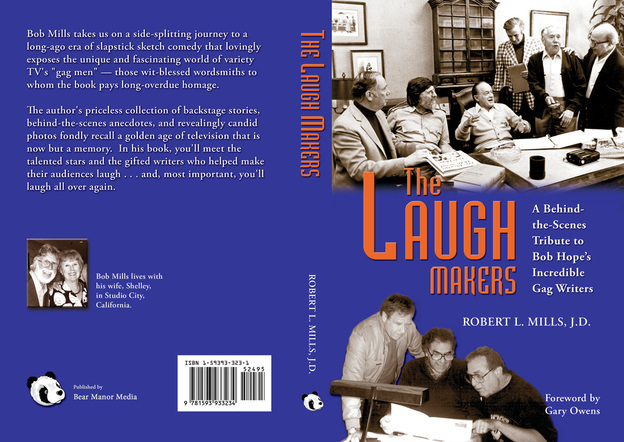 In this unabridged audio version of THE LAUGH MAKERS read by its author, you'll be taken on a fascinating and hilarious backstage tour of one of the longest-running variety shows in television history -- to examine the previously classified inner workings of a comedy assembly line that for decades worked as efficiently as any in Detroit.

Veteran Hope script writer -- with credits on 85 specials -- Bob Mills shares his priceless collection of behind-the-scenes stories, anecdotes and photos (many of which he took himself) while recalling often hilarious, sometimes heartwarming and always touching tales of legendary guest stars, near-legendary guest stars, Hope's loyal staff and production crew --- all the while providing new insights into Bob Hope the man and Hope the consummate vaudeville-trained performer.

What was Hope like to work with day-by-day?  How much control did he exert over his shows, his guests and his staff?  Was he the warm, personable everyman we saw on the screen --- or was he someone else?

Travel with Hope and his crew to Peking China in 1979, as they become the first Americans allowed to tape a special there following the historic Trade Agreement between Nixon and Mao ---  to Stockholm for a Command performance for King Gustav and Queen Sylvia --- to Perth, Australia for the opening of their Entertainment Center, Hope's first visit Down Under since World War II.

You'll be welcomed aboard the "Bounty" anchored in Cook's Bay as Hope and the gang journey to Tahiti for a star-studded special with guests Howard Keel, Jonathan Winters, John Denver and Morgan Brittany.  And it's "Talley Ho" as Hope returns to England for several command performances for Queen Elizabeth and Prince Philip.

THE LAUGH MAKERS covers two decades -- from the mid-1970s to the mid 1990s when Hope bid viewers goodbye for the final time.  Events and honors that continued up until Hope's death in 2003 are recalled in this unique look at one of the greatest entertainers of the past century.