In the Garden of Barbara Eden 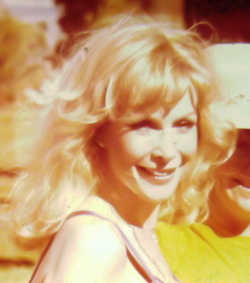 Probably best-known for her hit sitcom “I Dream of Jeannie“ (1965-1970), Barbara Eden has appeared on scores of TV comedies and dramas and in numerous films.  In the 70s and 80s, she was a Bob Hope favorite and guested with us many times.   Here are some of the highlights.

In 1978, Bob Hope launched what would become a series of specials shot in foreign locations.  He took his show to Australia for a 2-hour special that would open Perth’s new 7300-seat Entertainment Centre and would feature Barbara Eden, Florence Henderson, and Charo.

The Aussies’ welcome was as warm as the water of the half-mile wide Swan River that flows through the pristine city’s center. “I Dream of Jeannie” and “The Brady Bunch” were still in their first runs on Australian TV, so from the moment they stepped off the plane, Barbara and Florence were stalked by screaming, autograph-seeking fans.

Following the monologue, we set the stage for our obligatory customs sketch — always surefire in a foreign country — featuring Hope, Barbara and Florence as themselves confronted by an ultra-suspicious customs officer (Charo).

(Up on busy airport lobby)

(Barbara Eden and Florence enter the arrival area and move toward a long table with a sign reading:  “AUSTRALIAN CUSTOMS.”)

BARBARA: What’s taking Bob so long? I’d sure like to get to the hotel.

FLORENCE: It takes time to organize a spontaneous demonstration.

BARBARA: I think I saw him signing autographs. It’s ten dollars an autograph.

FLORENCE: He gets ten dollars an autograph?

(Hope arrives dressed as a typical Aussie Outbackker and is questioned by Charo.)

CHARO: I must fill out this form. Please indicate the province, state, kingdom, territory, principality or protectorate from which the applicant originally immigrated. (out-of-breath)

HOPE: Could you read that again?

CHARO: What’s the matter, you don’t understand my inflections?

BARBARA: That’s just the problem. He can’t take his eyes off of them.

FLORENCE: Bob, tell her where you were born or we’ll be here all day.

HOPE: I was born in England. Here’s my birth certificate.  (hands it to her)

CHARO: (looks at it) Wow! It’s not every day you see something signed by Queen Victoria!

HOPE: Isn’t that incredible? She was dead forty years at the time. 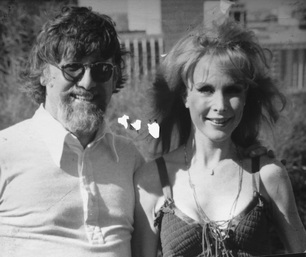 The author dreaming of Jennie

Later in the show, we dressed Hope and Barbara as koala bears with floppy ears and fuzzy noses.  They're sitting on a tree branch in the Outback.

BARBARA: What’s the matter, honey? You look like you’ve just been hit in the face by the Flying Doctor.

HOPE: I’m so depressed. I’d call my therapist, but his tree is unlisted.

BARBARA: (sympathetically): Aw, tell me about it. That’s why I have big furry ears — to listen to my husband’s problems in koala stereo.

HOPE: I found out something shocking today. We’re not bears at all. We’re arboreal marsupials.

BARBARA: Don’t worry about it. What’s in a name, anyway?

HOPE: Easy for you to say, but would Juliet have looked at Romeo twice if he had been an arboreal marsupial instead of a Capulet? It sounds like a disease. If word of this leaks out, we’ll be the laughing stock of the sanctuary.

BARBARA: You need to see a psychiatrist. Someone who’ll get you to relax and slow down.

HOPE: Slow down? Our lives are already so slow, snails use us as examples.

BARBARA: I know, and the kids are getting suspicious. We’ve had our bedroom door locked for six months.

They eventually decide that attending the Bob Hope television show taping would be just what the doctor ordered to cure his case of koala-funk.

HOPE: What amazes me is how Hope can think of so many funny things to say while traveling all over the world entertaining so many people.

BARBARA: That’s obvious. He must have a very remarkable mind.  In fact, he must be a genius.

BARBARA: Yes. (glares at him) Now can I have my passport back?

In 1983, we cast Barbara as a Geisha auditioning as a potential bride for “The Son of Shogun.”

BARBARA: Good afternoon, Your Highness. I am Princess Barbara-san and I’m here to dance my way into your heart.

HOPE: Be my guest. It’ll be a tight fit, but I’m sure there’s room enough in there for both of us.

BARBARA: When you see me dance, you will lose your head over me.

HOPE: Oh, please. It’s so hard to get parts.

(Her accompanist begins to play and Barbara dances sensuously.)

BARBARA: Do you feel rays of love radiating from my body?

HOPE: Not yet, but I sure like your radiator.


I ran into Barbara recently at the funeral of one of our Hope Show staff members and we reminisced about how much fun we all had working with Hope.  She still looks gorgeous -- and without a belly button yet.