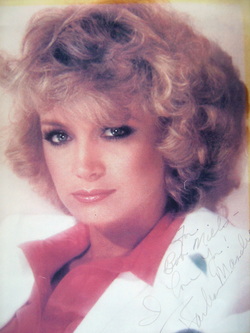 Barbara Mandrell had everything Hope sought in a guest. She could sing and dance, she had impeccable comic timing and — perhaps most important of all – she was a good sport.   She was so good acting in Hope sketches, he invited her back many times during the 1970s and 1980s.

At the Air Force Academy in 1980, Barbara appeared in a sketch with Hope, Andy Gibb and Loni Anderson entitled “Coal Miner’s Son” in which Loni played Maw Swampwater struggling to raise her guitar-strumming thirteen year old, Luke (Hope) in a Jawbone, Tennessee cabin that’s so rundown “the termites are dyin’ from malnutrition.”  Andy played a record company owner who tries to sign Hope to a long-term contract.

ANDY: Luke, would you like to sing for all America?

HOPE: I’m not sure. How loud would I have to sing?

ANDY: We’re looking for a guitar player who can sing sad. Can you sing sad?

LONI: Sad ain’t the word for it. Pathetic is more like it.

HOPE: (insulted) What do you mean, Maw? My gal Cindy Lou said I got a voice like a nightingale.

LONI: That ain’t what she said at all. What she said was you walk like Florence Nightingale.

ANDY: (to Hope) Sign with my company, and you’ll make a fortune with that guitar.

HOPE: Gee, I could afford to buy Maw a hairdryer, so she wouldn’t have to stick her head in the stove no more.

BARBARA: Luke, can I borrow your pucker? I got a powerful hankerin’ for some heavy-duty togetherness.

HOPE: (to Andy) Sparkin’ is all Cindy thinks about. Would you believe she’s on her third lip retread?

ANDY: (admiring her) Do all the gals around here look like that?

HOPE: Sad, ain’t it? She was the runt of the litter.

On the spot, the Colonel decides to resign his honorary commission, marry the Widder Maw and get a real job in the mine — just in time, by the way, to act as best-man at the wedding of Luke and Cindy Lou who turn in their learner’s permit for a real marriage license.

During a guest appearance on a special saluting the 60th anniversary of the National Football League, Barbara played Hope’s girlfriend “Bonny Sue” who roots for quarterback “Crazy Nose,” and his leather-helmeted, pre-NFL team.  After a bone-crushing collision, Hope is carried off the field.

ANNOUNCER: Crazy Nose has been injured and it looks like it could be serious.  As he was being carried off the field, he was gesturing wildly toward his insurance man.

BARBARA: You’ve got a fracture...

HOPE: That’s from the fullback...

BARBARA: You’ve got a broken toe...

HOPE: That right tackle’s not my friend.

BARBARA: They cracked your kneecaps...

HOPE: That was the left guard...

BARBARA: You have a dislocation in your neck...

HOPE: I’ve got mementos from all the players...

Despite his career-ending injuries, the coach — Michael Conrad from “Hill Street Blues” — sends Hope back in after appropriate medical treatment — “Here’s an aspirin.”  And, of course — inspired by Bonnie Sue’s unwavering loyalty, he recovers sufficiently to carry his team to victory.  The spot was another example of Hope taking advantage of his guests who could both sing and act.

Barbara had sustained serious injuries in an auto accident that killed another occupant of her car and as a result, she was a firm believer in seat-belt use long before it became mandatory.  Whenever she was invited to ride in a limo with Hope, she’d refuse to get in until he secured his seat belt -- in the back seat!

We were taping a show aboard the carrier U.S.S. Lexington that was docked in Pensacola, Florida, with guest stars Brooke Shields, Phylicia Rashad (The Cosby Show) and Barbara.  There had been a story in the news about a female Air Force officer and an enlisted airman court martialed for a romantic dalliance.  So we wrote a sketch in which Barbara, a Navy lieutenant-commander, commits the unpardonable sin of falling in love with an enlisted man — Hope, of course.

During a forbidden rendezvous in a paint locker aboard the Lex, two fellow officers played by Brooke and Felicia catch them in the act, and the following exchange takes place:

FELICIA: Commander, you’re not the first officer to fall for an enlisted man, but why him?

BARBARA: I think I fell in love with Ferdinand that day he was cleaning my porthole and his head got stuck.

As soon as Barbara got her line out at the dress-rehearsal — with several hundred off-duty gobs looking on — laughter spread across the Lex’s decks from port to starboard.

In a flash, the network censor was immediately on the phone to NBC in New York — to Freddy Silverman, the then-president. He wanted permission to excise the offending bit, but it was too late — the bell on the flight deck had rung, the ship had left the dock and Hope had heard the audience laugh.  Once that happened, not even a call from Billy Graham could make him delete the joke. The pope, maybe. But only because of Dolores.  To make matters worse, if such were possible, Hope responds to Barbara’s line with this:

HOPE: It was my fault. I thought they were all six and seven-eighths.

The exchange appeared on the show exactly as written — no cuts, no changes. The plain truth was that, when it came to what appeared on his specials, Hope had the final word.

According to her web site, Barbara Mandrell retired from country music on October 23, 1997.  Her last performance at the Grand Ole Opry House was called "Barbara Mandrell & the Do-Rites: The Last Dance".  The show aired on the cable channel TNN.