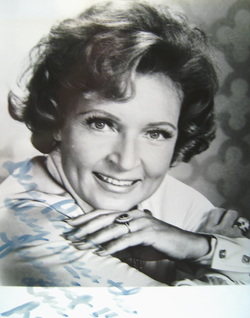 We cast all three in a sketch was set in a Betty Ford-style rehab clinic called "Shady Glen Rest Home for Coaches." They share a therapy session with staff psychiatrist Betty White.

(Betty enters the day room of the “Shady Glen Rest Home for Coaches” in a crisp, white uniform and carrying a clipboard.)

Casting amateurs was always risky but the three coaches showed a sense of timing and projection that belied their lack of experience treading the boards. Each showed up knowing his lines, and when changes were made in the script, they were quick studies. They had as much poise in front of the camera as many of our more experienced guests lacked. I was so impressed by them during rehearsal, I mentioned it to Hope. He said, “They’re not amateurs. They’re on television more than I am.”

Hope loved sports. He was a frequent visitor at some of America’s top golf courses (he often played with Palmer and Nicholas). As a youth, he’d had three prize fights as a professional, boxing under the name “Packy East,” a career he abandoned after he realized, as he put it, “I was looking at more canvas than Van Gogh.” Still, he remained an avid fight fan all his life.

WEEB: Doctor, why do we have to stay here?

BETTY: Certainly. You’re all cuckoo. Tell me, what pushed you over the edge?

BETTY: Then why did you do them?

Product endorsements had become a major income source for any reasonably articulate athlete able to read an idiot card. Joe Namath hawked Legg’s pantyhose; Jim Palmer Jockey Shorts; Johnny Bench Krylon, spray paint (“No runs, no drips, no errors”); and O.J. was sprinting through airports — this was in his pre-arthritis days — for Hertz “the Superstar of Rent-a-Car.”  It would only be a few years before Mean Joe Green would share a Pepsi with a kid in the players’ tunnel and set a record for highest commercial ad rate during a Super Bowl halftime. (Since surpassed twentyfold.)

BETTY: Does he always do that?

BETTY: (scolding) Never ever do that! He must be treated with kindness, sympathy and understanding. Have you tried hitting him with a rolled-up newspaper?

Despite behavioral evidence to the contrary, it turns out that the boys are still in possession of their full compliment of marbles and are nothing but overpaid malingerers. As soon as Betty is out of sight, they continue their round-the-clock poker game.

GEORGE: I hope we can keep it up. This is the greatest vacation I’ve ever had.

HANK: And the best part is, the owners are paying for it!

This was, to a comedy writer, an example of a perfect resolution of a sketch. It made sense, the audience didn’t see it coming, and it showed authority figures — the team owners — being bamboozled.  It helped make this N.F.L. special one of Hope's highest-rated shows of the 1980s.