Bob Hope: British and Proud of It 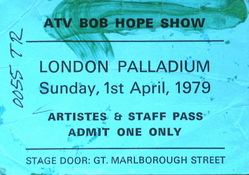 Though Bob Hope didn't spend his childhood there, he was always proud to call Great Britain the country of his birth, joking in his act that "I left England when I realized I had little chance of becoming king.  Little did I know, I could have swum over to Denmark and become queen."

Bob Hope was born in Eltham, England on May 29, 1903.  Three years later, his father, Harry, who had immigrated to the United States some years before, sent for the family which consisted of Hope, his five brothers and his mother, Avis.  They settled in Cleveland where Harry found work as a stone mason.  Growing up, Hope became a fan of fellow Brit Charlie Chaplin and won several amateur shows playing the Little Tramp, complete with tattered bowler, floppy shoes and cane.  At the conclusion of  1979‘s “Bob Hope Salutes the Palace Theater” he dedicated a song to Chaplin who had just died.

Many of his British entertainment contemporaries felt close to him.  When problems arose during production of a special we were taping in London in the 70s, Sir Lawrence Olivier called Hope from his summer home near London and offered his services if needed!  (Since what we needed was another female guest, it was film actress Susan George who came to the rescue.)   Richard Burton, whose exposure on American TV screens was limited by choice, never turned down a request from Hope to guest on his show, agreeing once to appear in a sketch when he had come to the studio only to pick up his wife, Elizabeth.   (Taylor to the uninitiated).

Throughout his life, Hope enjoyed returning to London regularly and in the final four decades of his life, often journeyed there to perform at the London Palladium, sometimes with Queen Elizabeth and Prince Philip in attendance.  These specials included “Bob Hope at the Palladium: A Lifetime of Laughter“ in 1979 (backstage pass pictured) and 1985’s “Bob Hope’s Happy Birthday Homecoming: A Royal London Gala.”

The death of Bing Crosby in 1977 canceled plans for a final “road” picture to be produced by Lord Lew Grade and titled “Road to the Fountain of Youth.”

Even in the later years, Hope always appeared to be nervous performing for British royalty.  When we commented on this, he said, "Of course I'm nervous.  She has the keys to the Tower of London." As writers, we often made reference to his British birth as in this sketch he performed at the opening of the Perth Entertainment Center as part of a special from Australia in 1978.

Charo, as an Australian Customs Officer is examining Hope’s passport.  “Wow!  It’s not every day we see something signed by Queen Victoria!”  Hope recovers somewhat by responding “Isn’t that something?  She was dead forty years at the time.”
We often mentioned his British roots in his monologues.  When Queen Elizabeth visited the U.S. in 1980, he said:

“Queen Elizabeth stopped by the Reagans’ ranch during her visit, and there was some confusion about bowing, which I thought was ridiculous. I know Nancy, and she doesn’t care if the Queen bows or not.”

During another visit, he was invited to dinner on board the royal yacht Britannia where he met Princess Diana for the first time, commenting later, "That kid will go far.  She knows how to caress a camera -- always with her head tilted slightly downward to erase the shadows.  Took me years to learn that."

While visiting China to tape a 3-hour special in 1979, Hope went virtually unrecognized while strolling the streets of Peking, but assured us that when we got to Shanghai, "people will know me there because I'm British and we were very big in Shanghai."  Later, he was dismayed to find that her was as unrecognized there as he had been in Peking.

Hope was never knighted by the Queen, but he came close.  In 1999, he was named Knight Commander of the Most Excellent Order of the British Empire, an honor for which he was extremely proud.  Some years after Hope’s death in 2003, his daughter Linda accompanied a large consignment of Hope memorabilia up for auction aboard the HMS Queen Elizabeth, making a trans-Atlantic crossing.  She continued her journey to complete the distribution of the collection in the town of Eltham, where thousands turned out to honor the local boy who made good.