The Bob Hope Show on the Road 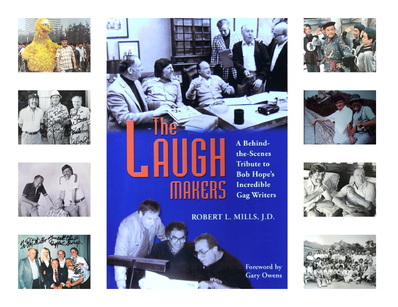 In 1951, launching his show on the new medium of television, Hope sensed that a weekly show like the one he had been hosting in radio would require more time and effort that he feared would reduce his live performances -- a tradeoff he was unwilling to make.  So he opted instead to present “specials” that would air about once a month.  He eventually gathered a staff that he could rely on to churn them out -- producer Mort Lachman and six writers he’d had since radio.

But shows produced in the same studio acquire a certain cookie-cutter look that no amount of creative set designing can disguise. For a weekly variety series, this sense of familiarity could be an advantage as it was for the entire run of “The Ed Sullivan Show” .and Milton Berle’s “Texaco Star Theater.”

But by the mid-1970s, Hope specials had been airing regularly, averaging eight-to twelve hours per year, for close to a quarter-century, and they had become, not surprisingly, not very special anymore.   So in 1977, at the behest of Texaco, with whom he had signed a new three-year contract, he agreed to take the show on the road, warming up with a journey to London for 1977’s “America Salutes the Queen.”

Returning home with symptoms of travel bug-itis, he immediately laid plans to take the show to the land Down Under — Australia. He put the two-hour special in the hands of an experienced, Australian-born producer named Chris Bearde — again, bowing to his sponsor, Texaco, and his network, NBC, both of whom preferred he hire separate producers for each special.
The critically acclaimed tour which included stops in Auckland, New Zealand; Sydney; Adelaide; Brisbane; Melbourne and Perth would prove to be a major turning point for the Bob Hope Show, which suddenly acquired wings and could turn up at just about any spot on the globe.

First, it was a trip to Columbus, Ohio for “Bob Hope Salutes the Ohio Jubilee” produced by Bob Banner at the Ohio Theater where Hope had appeared in vaudeville; the following year we were off to England for “Bob Hope at the Palladium: A Lifetime of Laughter,” and then to the Peoples Republic of China for an historic 3-hour special starring Mickhail Baryshnikov, Crystal Gayle, Big Bird and China’s leading comedians.

“Bob Hope on Campus”  took us to colleges all across the country later in 1979 and in 1980, we trekked to the rarified air of Colorado Springs, Colorado for “Bob Hope’s Birthday Party at the Air Force Academy,”  the first of Hope’s military academy specials, starring Loni Anderson, Glen Campbell and Andy Gibb.  In 1981, we flew to West Point along with Mickey Rooney, Bob Urich, George C. Scott, Brooke Shields and Marie Osmond to celebrate Hope’s birthday on the banks of the Hudson with the plebes of the U.S. Military Academy.

Then it was off to Grand Rapids, Michigan for “Bob Hope’s Celebration Opening the Gerald R. Ford Museum & Library” for an audience of foreign and domestic dignitaries that rivaled the UN.  1982 saw us wing off to Austin for “Bob Hope’s Stars Over Texas” and his third military academy special, “All hands on Deck for Bob Hope’s Birthday Party at Annapolis” with guests Roger Stauback, Bernadette Peters and Christie Brinkley.  In 1983, yet another college tour took us back to the campus for “Bob Hope Goes to College” with “Bob Hope’s Christmas in Beirut,” a USO special closely following.

We packed our shorts and Hawaiian shirts for “Bob Hope’s Wicki-Wacky Special from Waikiki”  in 1984, with Tom Seleck, Loni Anderson and Mr. T and then headed for the Big Easy for “Bob Hope’s Super Birthday: A World’s Fair Salute” from New Orleans, starring Twiggy, Tommy Tune, Brooke Shields and Placido Domingo.  Big Ben chimed and we responded in 1985 for “Bob Hope’s Happy Birthday Homecoming: A Royal London Gala“ in which Hope returned to his hometown of Eltham and taped a special at the London Palladium with Richard Burton, Leslie Uggams, Raquel Welch and Susan George.

Stockholm beconed in 1986 for “Bob Hope’s Royal Command Performance from Sweden," which was marred by the assassination of Olaf Palme, Sweden’s PM on the eve of our departure.  The fund-raising special, taped at the Oscars Theater, starred Glen Campbell, Shirley Jones, Emmanuel Lewis and Liv Ulman and should have been shelved.

Later that year, “Bob Hope’s Salute to General Doolittle” took us to San Diego, followed by “Bob Hope’s Tropical Comedy Special from Tahiti” which took us to Cook’s Bay and Papeete with guest stars Howard Keel, Jonathan Winters, John Denver, Miss America Susan Aiken and Morgan Brittany.  High point was a “Mutiny on the Bounty Sketch” taped aboard an exact replica of the famous ship that had been built by director Dino DeLaurentis.