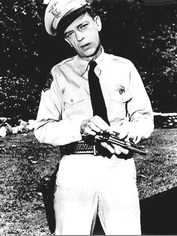 Throughout the 1970s and 1980s, Don Knotts was one of Bob Hope’s favorite guests and  one of the most endearing and talented character actors ever to work in film and television.  Don forever changed the image of law enforcement when he pinned on a badge as Andy Griffith’s deputy sheriff of Mayberry.  To take full advantage of Barney Fife’s invaluable experience as an authority figure in over his head and attempting to hide the fact, we cast him as the NFL’s chief referee, Moose Terwilliger in 1981's "Bob Hope's Stand Up and Cheer For the NFL's 60th Year."

HOPE: Welcome to the show, Moose.

HOPE: What was that for?

DON: Gotta keep the ol’ pea moist. Otherwise, she’ll lock up on you.

Back in Mayberry, Barney was forever keeping his peace officer’s equipment in apple-pie order — including the single bullet he wasn’t allowed to put into his gun without Andy’s permission. In this routine, the whistle will play the role of a weapon, and Don holds it as though it were.

HOPE: Moose, what qualities would you say are essential to being a good referee?

HOPE: Do you always know what you’re doing?

DON: I don’t even know what I’m doing HERE.

Don had begun his television career on the original Tonight Show as a “man-on-the-street” who was often interviewed by Steve Allen. His eyes bulged and his face twitched as he portrayed a mass of exposed nerve endings.

HOPE: Do those big football players intimidate you?

DON: (holds up whistle) The league says I have all the authority I need right here. (blows whistle)

HOPE: So it’s just you and a whistle against all those giants.

DON: Yeah, but if they give me any trouble, I just stand my ground and look ’em right in the navel.

HOPE: Tell me, Moose, what’s the toughest part of calling a penalty?

DON: Getting that little radio on my belt to work. During a game last week, I turned it on and got a rock ’n roll station.

HOPE: That must have been embarrassing.

DON: Sure was. Before I could shut the darned thing off, I had to penalize both teams for unnecessary dancing.

HOPE: Do losing teams ever blame your officiating?

DON: After one game where I made a few bad calls, they presented me with the game ball.

DON: Not really. It had to be surgically removed.

A consummate visual comedian, Don appeared as though he was actually undergoing the procedure right there on stage. Then Hope momentarily left the script and delivered this ad-lib:

As you would imagine, hearing this response for the first time, Don gave Hope what I characterized as not a double-take but a quadruple take. It was the only real laugh line Hope had in the entire routine, and he had given it to himself!

The line succeeded in doing what you hope all punch lines will do — create a clear picture in the mind of the audience that everyone sees at the same instant. They erupted into the biggest laugh in the show, and there were plenty of them. And Hope proved once again that he was one of the quickest ad-libbers ever.

HOPE: I’m sure some viewers aren’t familiar with the hand signals the referee uses. Could you demonstrate a few for us?

DON: Sure. (hands on hips) Offsides... (swings leg up)... Roughing the kicker...(palm behind knee) Clipping... (hands shielding eyes) This means “Heavens to Betsy, I made a boo-boo!”

HOPE: I can’t thank you enough for coming on the show and I’ll bet your family is proud of you.

DON: They sure are. Especially Dad. He always said I’d end up wearing stripes.

This type of one-on-one interview format crafted to capitalize on a well established comic character provided a welcome respite from the grind of conventional one-size-fits-all sketch writing.  We were able to create a variety of situations using costumes and props to enhance the comic possibilities. Hope would perform many of them with other established comic actors like Tony Randall, Don Rickles and Jonathan Winters and some non-actors who had become caricatures of themselves — like Howard Cosell.