Put Another Shrimp on the Barbie, Mate! 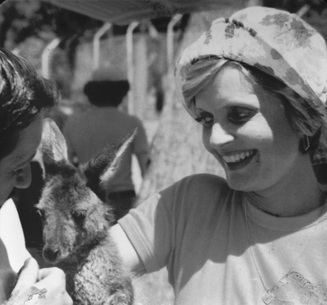 Hope specials had been airing regularly, averaging eight-to-twelve hours per year, for close to a quarter-century, and they had become, not surprisingly, not very special anymore. So at the behest of Texaco, with whom he had signed a new three-year contract, he agreed to take the show on the road, warming up with a journey to London for 1977’s America Salutes the Queen.

Returning home with symptoms of travel bug-itis, he immediately laid plans to take the show to the land Down Under — Australia. He put the two-hour special in the hands of an experienced, Australian-born producer named Chris Bearde.  The critically acclaimed tour which included stops in Auckland, New Zealand; Sydney; Adelaide; Brisbane; Melbourne and Perth would prove to be a major turning point for the Bob Hope Show, which suddenly acquired wings and could turn up at just about any spot on the globe.

The Aussies’ welcome was as warm as the water of the half-mile wide Swan River that flows through the pristine city’s center. I Dream of Jeannie and The Brady Bunch were still in their first runs on Australian TV, so from the moment they stepped off the plane, Barbara and Florence were stalked by screaming, autograph-seeking fans.

Following Hope's monologue (the longest he'd ever deliver), we set the stage for our obligatory customs sketch — always surefire in a foreign country — featuring Hope, Barbara and Florence as themselves confronted by an ultra-suspicious customs officer (Charo).

During the sketch, a suspicious Charo examines one-by-one every item in Hope's luggage -- and remember this was pre-nine eleven.

CHARO: What’s going on out here? (to Hope) What are you, a hooligan? I am Inspector Charo. I will inspect your bags, look in your socks, feel in your shoes, open your shirt...  (deep breath)

HOPE: Keep going. I may stay at the airport.

CHARO: What is your nationality?

CHARO: You can’t be American. You don’t talk like me.

CHARO: I must fill out this form. Please indicate the province, state, kingdom, territory, principality or protectorate from which the applicant originally immigrated. (deep breath)

HOPE: Could you read that again?

CHARO: What’s the matter, you don’t understand my inflections?

BARBARA: That’s just the problem. He can’t take his eyes off of them.

FLORENCE: Bob, tell her where you were born or we’ll be here all day.

HOPE: I was born in England. Here’s my birth certificate.  (hands it to her)

CHARO: (looks at it) Wow! It’s not every day you see something signed by Queen Victoria!

HOPE: Isn’t that incredible? She was dead forty years at the time.

CHARO: Now I must examine your passport.

HOPE: Here you are, darling. (hands it to her)

CHARO: (looks at it) This is a very good likeness.

BARBARA: It should be. It’s by Michelangelo.

HOPE: Wouldn’t you help a starving art student who needed the work?

CHARO: I must examine your luggage.  (opens bag, removes jar) What’s this?

CHARO: (with bottle): This?

FLORENCE: (to Charo): Keep going. There’s more of him in there than there is out here!

HOPE: How would you like to be attacked by my “Waterpik?”

CHARO: (removes a bra with three size EEE cups and holds it up)

HOPE: (to audience) I’m warning you guys. Never date anyone in the cast of Star Wars!

The sketch concluded with Charo discovering a live girl hidden in Hope’s steamer trunk whom he explains is his tennis instructor. As they stroll off together, Charo decides she’d better accompany them “to make sure there’s no ‘coochie coochie’.”

Cruisin' Down the River 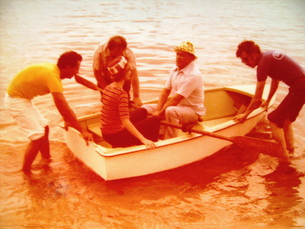 Later, we put Hope and Florence in a rowboat on the Swan River and provided them with some comedy dialogue to go along with their duet of “Cruisin’ Down the River.” For numbers like this, the music is pre-recorded so the per-formers can lip-synch the lyrics. The dialogue was on cue cards held aloft on the shore by Barney and his assistants.  The problem was that neither Florence nor Hope, both nearsighted, could make them out. Barney tried larger lettering. Still no luck.

In desperation, he decided to hold the cards above his head while walking in chest-high water just out of camera range and ahead of the rope pulling the boat just below the waterline. He took three or four steps backward and promptly submerged more quickly than Humphrey Bogart in The African Queen.  Florence laughs when she sees Barney disappear. Hope, who can’t see Barney in the water behind him, asks what she’s laughing at. Not wanting to spoil the take, she says, “Something just struck me funny.” Hope says, “Don’t stop. You may be the only one.”

The following day, Perth’s morning paper featured huge, front-page photos of one of Hollywood’s most experienced cue-card men going down for the third time, his cards floating aimlessly like rectangular lily pads toward the Indian Ocean.  It was the only time Barney ever pushed Hope off the front page and he never let Hope forget it.