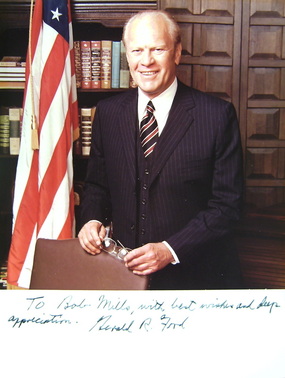 In the eyes of the public, Hope’s ties to Reagan appeared strong, but Gerald Ford was the politician who could truthfully be termed a “pal.” The former congressman, former speaker of the house, former vice-president, and former president had moved to Rancho Mirage, California with his wife, Betty, following his defeat at the hands of Jimmy Carter in 1976.  They lived near the hilltop estate the Hopes had built, and the two men often shared a cart on one of the ninety-five golf courses that give the desert oasis more sand traps per capita than Iraq. Besides that, their wives were fast friends and prominent members of the social scene at the posh weekend getaway that the Hollywood film community had adopted as its own.

Hope and Ford shared a genuine rapport that was obvious when they were together — which was often. Whenever a spot on one of our specials opened up for a former president, Gerry was a shoo-in. But he had passed on the Drama Club in favor of football at the University of Michigan and recited his lines like he was reading an eye chart. But Hope believed he added class to our guest lineups so he was invited back many times.

When in October of 1981, it came time to dedicate his new presidential library and museum in Grand Rapids, Michigan, Ford called in all the markers he’d been collecting from Hope over the years. He asked him to host a gala to which he had invited world leaders, former Washington big-wigs, current office holders, their families and staffs. Warm and likable, Ford had accumulated a bevy of friends during his long career on the hill (especially Nixon following the pardon) — so the guest list would be top-heavy with luminaries.

To produce the NBC special, Hope hired Bill Harbach, the son of composer Otto Harbach, who’d had extensive experience with shows taped before an audience of wall-to-wall designer gowns and $3,000 tuxes. Bill tapped Tony Charmoli, similarly qualified, to direct. The guest list was as gilt-edged as they come and included the Reagans, the Bushes, the Henry Kissingers, the Tip O’Neills, the Alexander Haigs, the John Saxons (ex-actor and former Ambassador to Mexico), the Casper Weinbergers, Margaret Truman Daniels and Lady Bird Johnson. Foreign visitors included French president Valery Giscard d’Estaing, Canadian Prime Minister Pierre Elliot Trudeau, Mexico’s President Lopez-Portillo, and Japanese Foreign Minister Sunao Sonoda. This had to be the largest gathering of world leaders short of a state funeral —- and we were offering entertainment.

The Hope troupe arrived in Grand Rapids on a Thursday — the show would tape the following Sunday — and over the next four days the town, whose former claim to fame was as the nation’s furniture capital and whose biggest event up until then had been the annual Amway Convention, would be transformed into a United Nations theme park rivaling Disney World.  As the foreign visitors swept in, each with an entourage that included family members, staff and bodyguards, the Hyatt Regency would be converted into an international security nightmare that rivaled Yalta.  Agents in plainclothes, wearing mirrored Ray-Bans and Bluetooth-like ear-pieces, were posted everywhere. Metal detectors stood guard at all points of entry and exit. German shepherds strained at taut leashes, sniffing elevators, broom closets and an occasional guest for explosives or other unwelcome contraband. And, remember, this was pre-nine-eleven.

Since most of the dignitaries were staying at the Hyatt, you never knew who you might run into. One afternoon, heading to Hope’s suite from my room, I went to the elevator and pressed the “up” button. The elevators were busy and I could follow the progress of this one floor-byfloor.  It was stopping at every one of them.  Finally, that little arrival bell sounded, and the doors slowly slid open. Standing there, all facing forward as though posing for a class reunion photo were, left to right, Henry Kissinger, Lady Bird Johnson, Tip O’Neill, Margaret Truman Daniels, Pearl Bailey and Mark Russell.  I said, “I’ll pass. I never take an elevator with no civilians on it.”  Most of them laughed. Okay, Henry Kissinger may have just grunted.  But you didn’t think I’d pass up an opportunity like that, did you? 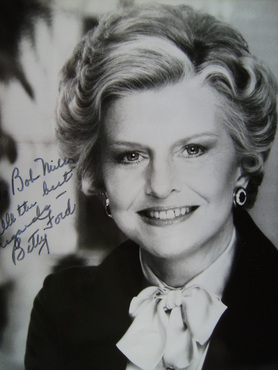 On tape day, I was awakened by the crackling of radio static in the hallway just outside my room. I peeked out and could see scores of Secret Service agents who looked to be about the same age as the troops Hope entertained dry-running their Dick Tracy wrist radios. It was early and I had to get on the job myself, but I asked one of the agents if they weren’t afraid of waking up the other guests.  “Sir, there are no civilians on this floor except you.”  I learned later that I wasn’t completely alone on that floor. I had slept just a few doors from Nancy and Ron who had checked in during the night. I noticed that whenever we worked in close proximity to presidents, congressmen, or world leaders, just being a Hope writer gave you an automatic “This guy can go anywhere” security designation.

With Hope’s close ties to Washington, we worked with the Secret Service many times over the years, and I can attest that they take their work very seriously. Each morning as I headed to the hotel coffee shop for breakfast, I’d pass a particularly stern-looking agent standing guard at the entrance. Just to be neighborly, I’d recite what I thought was best joke from the previous day’s output just to get his reaction, but got nothing but cold stares. On the morning of the show, I tried one last time and failed again.  “Gee,” I said, “I hope you laugh more than this when you’re in the audience.”  Without even a hint of a smile, he replied, “Don’t worry, sir. I’m off duty tonight.”

Our guests that night included Sammy Davis, Jr., Pearl Bailey, Danny Thomas, Debbie Boone, Foster Brooks, Glenn Campbell, Gordon MacRae, Tony Orlando and Mark Russell. Hope would deliver his longest monologue on a TV special. He had been given the rare opportunity to entertain an unprecedented gathering of world leaders and he would take full advantage of it. For twelve minutes, he’d kid Ford, the guests and the library.

*  Everybody who’s anybody is here tonight, which is why I’m up here. I wasn’t big enough to be in the audience.

In the midst of such a glittering assemblage, Hope displayed little of the nervousness that we had often noticed when he performed for Queen Elizabeth. Apparently, statesmen were one thing, but royalty was something else again.

*  At the cocktail party earlier, I wore myself out curtsying. I figured if Nancy Reagan wasn’t going to do it, somebody had to.

*  Mr. Ford has been a congressman, a vice president, a president and now he’s a hit man for the PGA.

Over the years, Ford’s slash-and-burn approach to the game provided us with literally scores of jokes like this. Between his beaning spectators with misdirected Titleists and his reputation for having played football in college without a helmet, he became our gold standard for minor injury causing ineptitude. We weren’t alone. Chevy Chase had made Ford’s two left feet weekly regulars on Saturday Night Live.

*  The Secret Service brought in dogs who spent three hours searching for bombs. I wouldn’t mind, but they kept sniffing my monologue.

We came up with that line while Secret Service dogs were actually sniffing the stack of Barney’s monologue cards. References to the tight security were standard comedy fare whenever Hope appeared at an official government function. The jokes tended to remind the audience, however subtly, of what important people they were to merit such extraordinary precautions. It was but another example of what a consummate salesman Hope was.