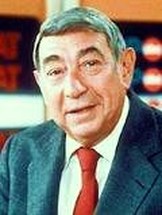 A former trial lawyer turned commentator, Howard Cosell carved himself a unique niche in the world of television sports.  He was irascible and a born curmudgeon who reveled in his contrarion's reputation with the public.  He was parodied on TV and played himself in several films including Woody Allen's "Bananas."  In real life, he grew into the image he believed the public had of him.  He was a frequent guest on Bob Hope's specials.

Howard Cosell was a former lawyer who, as a dutiful dad, had volunteered to describe his son’s Pop Warner League game for a local radio station and saw his law career quickly replaced by a new and more lucrative one — in broadcasting.  Coming to the game late myself from the courtroom, on our first special together, I was anxious and excited to meet him. I went up, introduced myself and said, “Howard, you and I have something in common.” He said, “What’s that?” I said, “We both started out as lawyers.” He just stared at me for a moment and said, “So?”

That was my crash course in Howard Cosell. Howard had been characterized by sports writers for so long as a certified curmudgeon, I think he gradually began believing it himself and felt compelled to deliver the crusty, cantankerous version of himself that he was convinced the public had come to expect.

He was rehearsing a routine in Hope’s dressing room and came to a line he thought could be improved upon. I happened to be standing nearby so Hope said, pointing to the joke, “See if you guys can come up with something better for Howard.” I noted the line and went back to the writers room where about five of us “threw lines” — made suggestions for the others to rule on — until we had ten replacements that we all agreed filled the bill.

I hurried back to Hope’s dressing room with the list. Hope was checking his makeup and motioned for me to hand the list to Cosell. He took it and, slowly looking it up-and-down, said, “Is this the best you could do?” I could see Hope wince. He obviously resented Howard’s assessment of his writing staff, one of whom, Charlie Isaacs, dated back to Hope’s radio days.
He snatched the list from Howard, quickly chose a new line and told me to get it to Barney McNulty to put on cue cards.

Despite his being difficult, Howard always added an air of authenticity to our sports specials, so he was invited back many times. Our NFL special in 1980 featured this quintessential Cosell segment and showcased the popular commentator at his best:

HOPE: Do you just start talking, or do I have to light a fuse?

COSELL: Robert, your facility for the jocular riposte, and your mastery of droll repartee doesn’t extract a measure of risability from me.

HOPE: Howard, either thank you...or you’ll hear from my lawyer in the morning — Howard, you’re such a personality,I wouldn’t even know how to describe you.

COSELL: That’s easy, Bob. Basically, I’m a journalistic interpreter, concentrating on the domain of athletic endeavor, a commentator who prides himself as much on his dispassionate veracity as on his eloquent and insightful reportorial aptitude.

HOPE: Would you make a needlepoint of that for me? I’ll hang it in my office. You’ve been on Monday Night Football for some time now. Have you ever thought of retiring?

COSELL: Not ’til the children are raised.

COSELL: The Giffer and Danderoo [nicknames for his fellow sportscasters Frank Gifford and “Dandy” Don Meredith].

HOPE: Howard, thanks for being with us.

COSELL: Robert, the gratification is distinctly and singularly mine. And should any specific circumstance necessitate a future reappearance on my part, simply voice your supplication, and it shall be made manifest.

HOPE: Thank you. Now I’m going backstage to run that through my decoder ring.