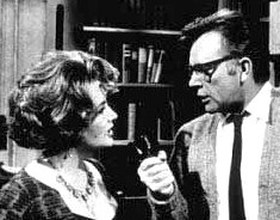 Elizabeth Taylor and Richard Burton
star in
"UP STETHOSCOPE!"

Casting Bob Hope Specials was always challenging since, often, the guest we wanted wasn’t available.  Once, though, a major star landed right in our laps.  Would you believe that Richard Burton just stopped by for lunch?  Back in 1985, we were taping a special entitled “Bob Hope Salutes the Soaps.” Hope had landed Elizabeth Taylor, known to be addicted to the daytime pot boilers, (Sammy Davis was, too.) and had promised that we’d write her a sketch that would parody her favorite sudser, “General Hospital.”

We set it in an operating room with Hope as a gastroenterologist who’s conducting a torrid affair with his head surgical nurse, played by Elizabeth. But the randy Florence Nightingale is concurrently scrubbing instruments for a pair of Hope’s fellow residents — Anthony Geary (whose marriage to Genie Francis on General Hospital had recently made headlines) and movie icon, Glenn Ford.

As the sketch begins, Hope is prepping the patient on the operating table. Liz and an older nurse assist him:

HOPE: (Peeking under sheet) My, my. What a nasty wound.

HOPE: It is? I was never good at navels.

HOPE: (Burps) Oh, they gave me a flavored one and I ate it. I wonder what you take for cheesecloth heartburn.  (Liz crosses to the door. Glenn Ford, in surgery togs, is standing there and they hug. Hope cannot see them.)

GLENN: I love you!

LIZ: I love you too, my darling!

GLENN: Then we’re going to Acapulco right after the operation!

HOPE: (Busy) Hey, will you turn off that TV! I can’t listen to soap operas while I’m operating!

VOICE: You just lost your patient in 204.

HOPE: Oh, drat. Another funeral I have to attend.

LIZ: (arm around him) Oh, you poor baby.

HOPE: I’m so tired of being stoned by the mourners.

LIZ: Oh, they’re sooo mean to you. (kisses him) Your breath smells like wintergreen.


(Tony Geary, in a white smock, emerges from behind a screen. Liz rushes to him and they embrace, again out of Hope’s line of sight)

TONY: Are we running off to Acapulco together?

LIZ: You know we are, darling!

TONY: Without a doubt, you are the most beautiful girl in the world.

HOPE: (Busy) Will you please turn off that TV?  (Steps back) There, that should do it. Through no fault of mine, the operation was a success! (puts down scalpel) You know, we doctors like to get patients back on their feet in a hurry these days. (Pulls back sheet) C’mon, up!  Up!

(The patient sits up. We see that it’s Richard Burton. He climbs off the table, takes Liz in his arms and gives her a lengthy embrace — a very lengthy embrace.)

As expected, when the audience spotted Richard, there was such a gasp, all at once, the air was sucked out of the studio. When he took Liz in his arms, they whooped and hollered loud enough to be heard in Glendale.

HOPE: Hey, wait a minute! You’re stealing my girl! What do you have to say for yourself?

HOPE: (grabs Dick) Hey, wait a minute! Where do you think you’re going?

LIZ: Well, one thing’s for sure. (Looking at each other) It won’t be Acapulco!

(They exit arm-in-arm as Hope and the others look on in disbelief.)

In our original sketch, the “patient” on the table was a bit player with whom, in our story, Liz was also having an affair. During rehearsal, Richard Burton arrived on the set to pick up his wife for lunch. We all looked at him with the same idea. Would he mind lying on the table for a few minutes? We’d write a few lines for him and, since he hadn’t been booked on the show, would surprise an audience who had no inkling he was in town. Burton was a big fan of Hope’s and a good sport. He agreed and provided us with a blackout the likes of which writers can only dream.