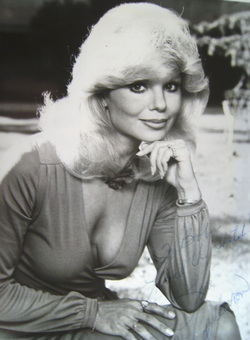 In the 1970s and 1980s, Bob Hope called upon one of his favorite TV glamor queens often.  Loni Anderson had become popular on the hit sitcom “WKRP in Cincinnati” and, over the years, her number of guest appearances on Hope specials was rivaled only by those of Brooke Shields.

Loni Anderson represented, in one talented package, all the sultry screen sirens with which Hope had become so identified. She incorporated the allure of Rhonda Fleming, the intelligence of Jill St. John, the charm of Virginia Mayo — all that plus the comic timing of Phyllis Diller.

On a 1982 special, we cast Loni Anderson and Hope as astronauts on the first coed space-shuttle mission. The sketch opened in the morning as Loni arrived on the flight-deck to relieve Hope who had been standing watch all night.

HOPE: No, ma’am. I watched my favorite program, “WKRP in Uranus.”

He pronounces the planet’s name with a long “a,” and laughter engulfs the room. Read-throughs at NBC were held in rehearsal halls that had been designed for dancers — huge, cavernous affairs with wooden floors and tall mirrors and a railing along one wall.

Springing from a table in the corner, an S&P guy zeros in on Hope like a kamikaze pilot.  That pronunciation just won’t be tolerated at the network. Hope responds that he’s pronounced the name of the planet that way all of his considerable life and isn’t about to change now.  Anyone who had been with Hope for any period of time knew that his line would be delivered on the air exactly as it had been delivered here for one unassailable reason — it had gotten a big laugh. And that, lest we forget, was Hope’s business — getting laughs — the bigger the better.

At the Air Force Academy in 1980, we cast Kenneth Mars -- who had been hilarious as the Nazi playwright in Mel Brooks’s The Producers -- as the academy commandant who discovers a cadet who has somehow fallen through the administrative cracks and has been attending classes for twenty-six years.  An intelligence officer has been sent from Washington to head off the potential scandal:

LONI: Our report says that Cadet Hope entered the academy in 1959 and didn’t surface again until 1966.

KEN: That’s right. When he ran for Homecoming Queen.

KEN: It’s worse than that. He won.

LONI: I guess I’ll have to take care of this problem myself (winks) if you know what I mean. I assume that even after twenty-six years, he still likes girls.

KEN: We’re not sure. For the last ten years, he’s been sleeping with his parachute.

LONI: You really can’t blame him. I hear it’s the only nylon cadets ever come in contact with.

A line like this delivered by Loni  — sausaged into a dress that looked like a blister-pack — to a crowd of eighteen to twenty year-old males with hormones in a state of higher alert than S.A.C. was as close to a guaranteed scream as comedy writers ever get. We weren’t disappointed. 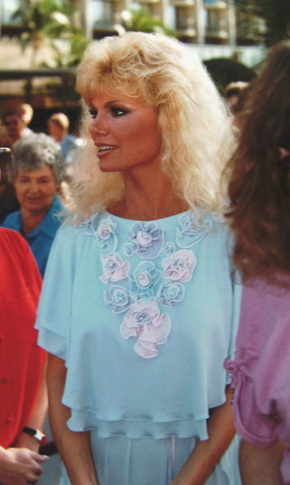 Shooting on the beach of Waikiki

One year, we cast Loni in a sketch parody of the popular mini-series “Shogun.”  Hope is auditioning three bride candidates played by Linda Evans, Brabara Eden and Loni.

HOPE: Like it? Figure make Mount Fuji look like Little League pitcher’s mound. But why are your feet so small?

HOPE: Bound for where? Mind if I aim them toward my boudoir?

LONI: I am honored to be in your presence, Shogan-san. I am your loyal and obedient servant.

HOPE: Ah, what is your specialty?

LONI: I am a student in the art of love.

LONI: Oh, you wouldn’t like him — I have come to teach you the secrets of exotic, Oriental-love techniques.

This is vintage Hope as we took full advantage of the character he had developed over the course of four decades in the arms of such glamor queens as Marilyn Maxwell, Jane Russell, Diana Dors, Jayne Mansfield and Raquel Welch.

This seemingly endless line was made up of leading ladies who were beautiful, talented and, most important of all when it came to appearing in sketches with Hope, good sports.  Loni was the eighties version, and we called upon her often.