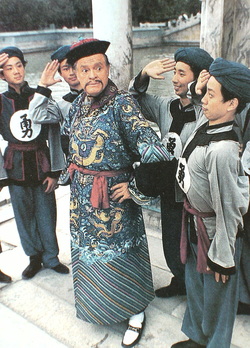 In 1974, soon after Richard Nixon opened relations with the People’s Republic of China, Bob Hope began a behind-the-scenes campaign to become the first American entertainer to tape a television special there. He spent the next five years cajoling the State Department and the Department of Defense — at the start of every new season, I’d say, “We doing China this year?” and he’d say, “Any day now. Stay packed.”

Leaning on a raft of influential government pals including Henry Kissinger and calling in markers he’d been collecting from the government since World War II, he finally received permission to take our show there as part of a cultural exchange program dubbed “Ping-Pong Diplomacy” by the press.  So on June 16, 1979, after a four-hour flight from Narita, Japan, a Chinese Airlines 707 filled with our merry band of mirth makers eager to get their first look at this hotbed of Communism, touched down at the Peking Airport. The group included Bob and Dolores Hope, their daughter, Linda, her co-producer Jim Lipton — with whom Gig Henry and I would share writing credit — Jim’s wife, Kedakai, director Bob Wynn and a support crew made up of pretty much the same gang who had earned their Hope Squadron wings on our trek to Australia the previous year.

Our guest stars would arrive over the next several days — Mikhail Baryshnikov, Crystal Gayle, Big Bird from Sesame Street, mimes Shields and Yarnell and a popular disco-duo, Peaches and Herb. We’d be spending a full month on location — three weeks in Peking and a week in Shanghai. While many major stars would have welcomed this rare opportunity to see China, most are unwilling to commit that much time to any project short of a film and Hope wasn’t paying movie caliber fees.

During our visit, we were allowed to shop — officially — only at government-sponsored retail outlets for tourists called “Freedom Stores.”  Here the prices were set and clearly marked. No dickering. Even so, they were reasonable, and I brought home three good-quality wool rugs which still serve admirably.

Longing for a little more adventure, one afternoon Don, Gig and I slipped away from our guide for a couple of hours. In a narrow alley about a mile from the hotel, we discovered a small antique shop, obviously not intended for tourists. The musty interior was piled high with artifacts from estate-sales — rugs, furniture, household utensils, silverware, paintings, photos, lamps, vases, family stamps called chops made of marble or ivory and decorated with dragons, lions, monkeys and other characters from China’s ancient mythology. More items made of ivory — chopsticks, statuary, and finely-carved jewelry.

Up a narrow flight of stairs was the clothing — kimonos, men’s suits, jackets, caps, sandals, shoes — all in a pile that said it hadn’t been disturbed in years.  Hanging on one wall of the dimly lit mezzanine, almost unnoticed, were old costumes retired from the Peking Opera — multicolored capes, pantaloons, garments weighted down with gold embroidery. Here was a treasure trove that foreigners weren’t supposed to find! We felt like Sydney Greenstreet stumbling upon the Maltese Falcon. We made a few purchases and headed back to the hotel.

That night over dinner, we mentioned our find to Mikhail Baryshnikov — Mischa to his friends, thank you — and he went giddy with excitement. Peking Opera costumes? Authentic ones?   Immediately. we had to draw him a detailed map so he could check them out next day.  A few days later, Mischa’s manager asked me if I’d be willing to lend his client some money. He had run through his shopping allotment ($3,000) but had arranged to buy five of the costumes for around $300 apiece. I said, “Like I’m gonna lend money to a Russian defector who’s in show business? This is a joke, right?”

Just kidding.  Actually, I had about tapped out too, but suggested he ask our production cashier, Wil Oborn — we were issued a daily per diem in yuan — for an advance.  He did and I’m told the five priceless costumes are now on display in his Manhattan brownstone.