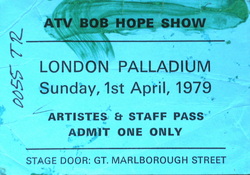 London, April 1979.
It’s the day before we’re scheduled to tape an hour-long special, An Evening at the Palladium, for a black-tie audience that will include Queen Elizabeth and Prince Philip. Gig Henry and I are going over the script with Hope in his dressing room, and, as usual when he was about to perform for royalty, he’s wrestling with some last-minute jitters. (“She has the keys to the Tower of London.” ) Also present are executive producers Sid Vinnage and Elliott Kozak, and a British writing team who had been hired to assist us, Dick Vosburgh and Gary Chambers.

The phone rings. Hope picks it up, and on the other end of the line is one of our guest stars, Richard Burton, whose voice fills the room even though it’s not a speaker-phone. It seems that Dick’s “people” — read new wife of some three weeks, one of Burton’s “between Liz” marriages — don’t think it’s in the actor’s best interest to be doing a love scene with co-star Raquel Welch in a sketch we’d prepared for them — a parody of the popular PBS series Upstairs, Downstairs that we had re-titled "Backstairs at Buckingham Palace." Hope cups his hand over the mouthpiece and asks us if we can rewrite the sketch omitting the kissing. We all shake our heads “no” — if the love scenes go, there’s no sketch.

Hope tells Burton he’ll get back to him and hangs up. We carefully go over the sketch line-by-line just to be sure, and Hope agrees that, unless Burton has lip privileges with the downstairs chambermaid, we’ll have to write a whole new sketch, and time, as they say over there, is frightfully short.

Hope gets an idea. He calls Burton back and asks him if it would help if the chambermaid were someone other than Raquel. Several minutes elapse while Dick again checks with his people. That would solve the problem very nicely, he tells Hope.  Goodbye, Raquel.  Vinnage starts calling his British contacts and soon locates actress Susan George who’s appearing in a stage play about three hundred miles from London.

Susan, an experienced performer who had recently costarred with Dustin Hoffman in the popular American movie, Straw Dogs, agrees to step in for Raquel despite a case of laryngitis, finishes her matinee and arrives at the Palladium just hours before showtime. After a quick rehearsal, she bravely goes on for Raquel and ends up sharing equal-billing with Welch, Burton and Leslie Uggams. Later, Raquel explains to a group of British reporters that she had rejected the sketch because she was unhappy with her lines. This time, we were happy to take the rap.

Richard Burton was one of the hardest-working actors we ever had on our show. One day after lunch, we entered the backstage entrance to the Palladium on our way back from lunch.  Burton was scheduled to tape a segment with Hope later in the day and as we threaded our way through the darkness, avoiding the ropes, pulleys, sandbags, and other backstage hazards, I could hear a lone voice on the unlit stage in front of the curtain reading lines from our script.

The voice unmistakably belonged to Richard Burton, and he was experimenting with various inflections — “Yes, Bob... Yes, indeed, Bob... Righto, Bob...”. I peeked through the curtain and said, “Dick, you’re not actually rehearsing that fluff we wrote for you?”  He said in all seriousness, “I am.”  I said, “You’ve probably played King Lear a hundred times on this stage.”  And Burton said, “True, but the King never says anything stupid.  Richard Burton often does.”