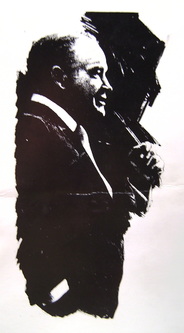 Do you have any memories of Bob Hope you'd like to share?  Or thoughts about his life and remarkable career?  We are currently designing a separate page to post readers' comments and we'd like to include yours.

Thanks for your memories!

I made Bob Hope laugh! Although my aspirations through adolescence and beyond, focused

more on being a cartoonist than trying to move into the spotlight of stand-up comedy. I did

make Bob Hope, one of the funniest comedians of our time, laugh. Humor can serve as a

tremendous comfort in the aftermath of tragedy. Of course, the timing has to be right and the

humor must be appropriate. It was tragedy that brought the great comedian to Wichita State

football players, coaches, and supporters began to make their way over the Colorado Rockies on

their way to Provo, Utah for a game with Utah State. The pilots of the respective planes chose

two separate passes for the flight through and over the mountains. One plane made it safely to

its destination. The other plowed into a mountainside just outside of Denver, killing 31 aboard.

The ill-fated plane carried the first string players of the football team, the head coach, the athletic

director, the trainers and supporters of Wichita State University.

and the days that followed stand out in my mind as if it were yesterday or last week. I was on

the Track Team at WSU and had walked onto the football team for one year. After that year, the

Track Coach encouraged me to stay with the sport for which he had recruited me. I obliged him.

With my exposure to Wichita State athletics and my time on the football team, I knew most

everyone who lost their lives on that mountainside in Colorado. Some were very close friends.

A tragic event! And, this was an especially grievous time for the families of the victims.

This is what brought Bob Hope to Wichita. He served as the emcee for an event called “The

raiser for the families of those who perished in the plane crash. I loved Bob Hope and have seen

to…” films. In one of their early movies, two endings were filmed in which each of the leading

men ended up with Dorothy Lamour. Cinema goers were polled and overwhelmingly chose

Bing Crosby. Bob Hope was really annoyed with the result and got back at Bing by constantly

reminding him that he wore a toupee. Hope later said the greatest acting performance he ever

On one very average day in Wichita, Kansas, as I had just finished dressing for Track practice

and was making my way through the tunnel connecting the locker rooms to the Field House,

I had no idea what awaited me. There was an extraordinary crowd of people backed up in the

tunnel as we were shoulder to shoulder trying to make our way out. Another stream of people

was trying to make a way into the tunnel. I asked what was going on. Someone headed the other

way said, “Bob Hope is making his way back to a dressing room.”

And, then it happened! The sea of people parted and I was standing face to face and within 3

feet of Bob Hope! I looked him straight in the eye, smiled and said, “Mr. Crosby!” He stopped

right there, put his hands on his hips and started laughing. He really laughed hard! Then, he

In the aftermath of a most horrific event from which our entire campus and city were reeling, this

comedic icon brought hope to a hurting community. THAT was a humble, compassionate and