The Revenge of Miss Piggy 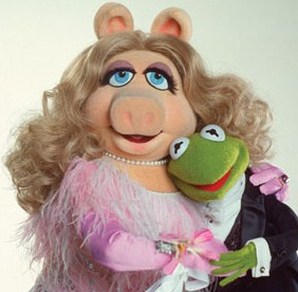 Bob Hope and the Muppets enjoyed a mutual admiration that came across on the screen every time they appeared on one of our specials or he guested on their syndicated series. They taped their weekly show at Elstree Studios near London, and whenever we were in England, Hope was sure to drop in. He also appeared in a cameo role as an ice cream vendor in their feature film, The Muppet Movie. His friendship with them had to be the warmest comedian-puppet relationship since W.C. Fields and Charlie McCarthy.

I think it was because they were so much alike. Jim Henson, the creator of the charming group of woolen wonders, was as careful about the material that he’d let come out of their mouths as Hope was about choosing
jokes for himself. Both realized the importance of consistency in their characters and situations that the audience had come to expect. Whenever we submitted routines for the Muppets, Jim and his partner Frank Oz — the voice of Miss Piggy — would change any line that didn’t feel just right for their latex-and-felt cohorts whom they knew intimately. Reviewing a script, Jim might say, “This joke isn’t right for Kermit. Fozzy Bear might say it, but not the frog.” He spoke of them as though they were human, and, after working with them, I was convinced they were, too.

As usual, they added a delightful touch to a sketch on our World Series special that cast Hope as a major league team owner on the lookout for talent.

KERMIT: What did you want to see me about, Mr. Hope?

KERMIT: I get it. You’re doing another road picture, and you want me to be your co-star. You’re in luck. I happen to
be at liberty.

HOPE: Hold on to your lily pad, Kermit. I need someone who can hit forty homers, drive in a hundred-and-twenty runs and steal thirty bases.

Miss Piggy was the brainchild of Henson designer Kermit Love (no relation) who had modeled Miss Piggy after singer Peggy Lee, and named her “Miss Piggy Lee.” She had long, flowing hair like Peggy’s and a mole on her chin. After several appearances on television, the phone rang at Henson HQ — Ms. Lee’s lawyer threatening to sue.  But everyone on the show liked the puppet so much, Love decided to make a few adjustments. He removed the mole, made her a new curly wig and dropped the “Lee.” The rest as they say...

MISS PIGGY: I know, dear. What else could be so dull?

KERMIT: Bob was talking about me joining his team. It’s nothing that would interest you.

MISS PIGGY: It would if I were your agent.

This was a theme that ran through almost every routine we wrote for the Muppets — either Hope was going to join their troupe or one of them was to become his partner. The deals invariably fell through, when both sides realized what a good thing they had going. Why tamper with the success of superstars?

Though best known for their work on the PBS children’s series Sesame Street, the Muppets maintained a level of sophistication a few notches above that of some of our human guests. So completely convincing were they, the sound man would often hover the boom mike above their heads as they spoke, forgetting that their operators provided the voices on separate mikes located behind the stage.

MISS PIGGY: Kermit wants three-hundred grand for the season, limousine service to the ball park, caviar and champagne between innings, fresh flowers in the dugout daily and, oh yeah, a hairdresser for his agent.  In 1978, demands like these were exaggerations. How times have changed in thirty years. That would be parking meter change for today’s hot prospects.

When it becomes clear that Kermit isn’t willing to leave the Muppets, Miss Piggy withdraws her client’s offer, but Hope manages to get in one parting-shot.

HOPE: I guess you wouldn’t be interested in playing football, either, huh?

MISS PIGGY: I beg your pardon.

HOPE: You know, kicking the ol’ pigskin around. (She winds up and punches Hope squarely in the solar plexus.)

The Muppets appeared regularly on our show throughout the eighties and in 1995, three years following the death of Jim Henson, they landed their own prime-time network series on ABC.

Inside the Big Bird costume resides a talented puppeteer named Carroll Spinney who, thanks to a special contractual arrangement with Jim Henson Productions, operates the only Muppet character allowed towork solo. Besides the constant maintenance he requires (he loses about 350 turkey feathers per outing), the bird is no piece of cake to operate.  While providing the voice, Spinney must keep his left arm extended over his head to work the beak and simulate neck movement. All the while, he’s watching a three-inch TV monitor inside the bird’s chest cavity just to be able to navigate. A small fan supplies some air circulation,but Carroll usually emerged looking like he’d been in a sauna. He relies on an assistant to keep the Bird looking spiffy and his operator from falling off a stage or walking into traffic.  Of all our guests over the years, Big Bird was probably the most underpaid,considering what goes into every performance.