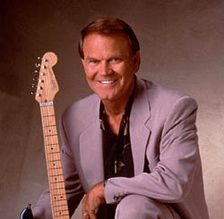 Bob Hope was partial to booking singers on his specials because they are usually adept at playing sketch characters.  His theory was that singers are story-tellers and have an inborn talent for acting.  One of his favorites was Glen Campbell, as solid a sketch actor as ever was.  Multiple Grammy winner, world-class guitarist — he was for many years a studio musician — Glen  was a frequent guest on our specials both home and away and could be relied upon to make our sketches come to life. It was no mystery why he remained one of Hope’s favorites.

In 1978, the World Series was celebrating its seventy-fifth anniversary, and the Los Angeles Dodgers had captured the pennant. Hope sold NBC on the idea of doing a two-hour special — back then called a “Big Event” — to showcase the Series.  In this sketch, Glen played “Oink Smith,” a potential major-league pitching phenom recruited by scout “Branch” Hope.

(Up on backwoods cabin. Hope emerges through the bushes.)

JOHN HARLAN: (V.O.) The least-appreciated but hardest-working man in baseball is the scout, endlessly in search of another Babe Ruth or Warren Spahn, someone who will rewrite the record books. The scout suffers pain and discomfort, hunger and thirst. Here then, is our tribute to the scout, personified by Branch Hope. We find him closing in rapidly on another Bob Feller...

(We hear someone inside the cabin shooing chickens who come through the door, pushed by a broom. Glen emerges, wearing coveralls and has a front tooth blacked out.)

GLEN: Git outta here! Out! Out!  (The chickens scurry off the porch and spots Hope) Howdy, stranger... I’m just doin’ a little house-cleanin’ ’fore my wife gets home from her job shellin’ peanuts over at the Carter place. (1)

HOPE: Must be the spread I noticed coming in. That’s the first time I ever seen a scarecrow made out of beer cans. Is your name Oink Smith?

HOPE: Isn’t that kind of an unusual name?

GLEN: Well, my ol’ pappy thought it up. He wanted the neighbors to think we could afford a pig.

HOPE: ( to audience) And I’ll bet he got away with it, too...  Are you the Oink Smith who won first place at the state Rock Throwin’ Festival?

HOPE: (to audience) I know the feelin’.   Sign with me and you’ll be so rich, you’ll be bathing in Gatorade.

GLEN: Sounds messy. Besides, I don’t need any more money. I got lucky with one of my crops.

HOPE: Really? What did you plant?

HOPE: (to audience) With a little education, this kid could be an idiot…  Forget all that. Just feast your eyes on this...(takes baseball jersey from suitcase)

GLEN: That’s real pretty. That what they call ladies lan-gee-ree?

HOPE: Son, that’s a baseball uniform. Here, try it on.

GLEN: Which end’s it go on?

HOPE: In your case, it don’t make much difference. (helps Glen into jersey)... now I gotta get you a hat. (to audience)  Let’s see what we got in the punkin section. (hands Glen a cap which he puts on)

HOPE: You look great. (pulls out a flattened, beat-up fielder’s glove) Here, try this on.

GLEN: (studies it) Mercy. What happened to the rest of the cow?

HOPE: (to audience) This kid could run for Congress. (hands him a baseball) Here, try that.

HOPE: Son, that’s called a baseball. You throw it like a rock. I’m prepared to pay you three hundred thousand dollars a year just to throw it.

GLEN: Three hundred thousand? I ain’t seen that much money in my whole life.

HOPE: (hands him a pen and paper) Just put your “X” right here.

GLEN: Shucks, I knew there was a catch to it. “X” is one of my worst letters.

GLEN: You’re kidding. I thought I was takin’ the Pepsi taste test.

GLEN: How’m I gonna break the news to my pretty ma? How can I leave that old lady? What if she don’t let me go?  (A suitcase, packed, comes flying out of the cabin and lands at Glen’s feet.)

GLEN: Goodbye, sis. (Another gorgeous blond comes out, and Glen kisses her.)

HOPE: (Arms around girls) You go alone. I gotta check your roots!

(1)  Jimmy Carter was president at the time.  He had a beer-drinking brother named Billy.
(2)  George Allen had just been fired as coach of the Washington Redskins.

At West Point in 1981,we wrote a sketch with Hope, Glen Campbell and Robert Urich as West Point’s first class of 1802. Mickey Rooney, a former Indian fighter of some renown,  was cast as the academy's first commandant.  One the first day of military instruction, he conducts roll call:

MICKEY: Cadet, I'll have you know that there are no yo-yo’s at West Point.

HOPE: Sorry, sir. For a minute there, I thought I was at the Naval Academy.

Hope’s line got a huge laugh, as we knew it would, since rivalry among the academies is strong. But we’d allow the midshipmen at Annapolis to get even the following year when we'd tape a special there.  I first met Bob Urich while writing on The Dean Martin Celebrity Roasts.  The former Vega$ star was a great guy who died much too young of a rare form of cancer. He was married to one of the Von Trapp girls in The Sound of Music, Heather Menzies.

ROONEY: All right, men, count off!

CAMPBELL: Count off? What’s that?

ROONEY: You count off, using your number.

ROONEY: The number you were assigned. For instance, (points at Hope) he’s one.

CAMPBELL: (looks down the line at Hope) Boy, you sure can’t tell nowadays, can you?

Hey, this was another time, another era — long, long ago.

Later in the sketch, George C. Scott arrives on the scene as an Indian chief seeking the return of the land West Point stands on:

MICKEY: By the way, Chief, what did you people call this land before we arrived?

In February 1986, we flew to Stockholm to tape a Command performance before King Gustav and Queen Sylvia.   The night of our departure, Sweden's Prime Minister, Olaf Palme, was assassinated while walking his dog.  At the King's request, we proceeded with the show but it was a disaster.  Despite the sad circumstances of the trip, one highlight stands out.

One night, after a long day of rehearsing, we returned to the hotel around nine o’clock. It was about 40 degrees below outside, and there was a nice fire going in the lounge, so Glen Campbell asked Gene and me if we’d like to join him for a nightcap. There was a fairly good jazz quartet — drums, two guitars, bass — that played there every night. We had noticed them before but were always too busy to stop. We sat at the bar for a few minutes and were recalling our day in Birdseye-ville when one of the guitar players asked Glen if he’d like to sit in for a number.

Usually, professional musicians hesitate to take anyone up on an offer like that since it’s what they do for a living and is a little like asking Picasso to sketch something on a bar napkin. But Glen isn’t your usual pro. He loves to practice chords with his own guitar and often does — in airport lounges, television studio dressing rooms, and maybe even while showering.  Glen just loves the guitar. I suspect the guy in the quartet was a big fan, knew this, and also knew that Glen would have a hard time turning him down. He was right. “Okay, just one number.”

Glen took the instrument, fine-tuned a couple of strings and began picking the melody of “A Foggy Day” — the house musicians were British.  Now the bartender is on the phone — “You’re not gonna believe this... “ in Swedish, of course, but you could tell what he was saying by the excitement in his voice. Several couples who had been sitting in the lobby drifted in and took a table near the bandstand. As other guests arrived, they could see and hear that something special was occurring in the bar.

Nobody headed upstairs and nobody left. Glen, as usual, was doing some astounding riffs. I asked him once how he got so damn good, and he said that as a kid, he would dream guitar chords and play them as soon as he woke up. That, my friends, is genetic. Even the owner of the guitar Glen was playing couldn’t believe the sounds he was getting out of it.  Glen’s “one number” was soon three and then five. The crowd had grown to thirty or forty people — some sitting, some standing, all mesmerized.

When he finally handed the Gibson back to its owner, the applause was enough to wake up guests in their rooms who had missed Glen’s impromptu concert.  It was one of those once-in-a-lifetime moments you just never forget.